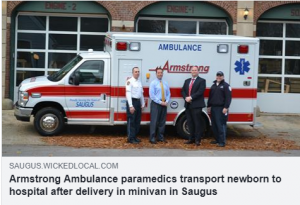 Armstrong Ambulance Service reports that Armstrong EMS personnel safely treated and transported a newborn baby boy and his mother to the hospital after the baby was delivered by his father in the back of the family’s minivan early Monday morning.

At approximately 1:35 a.m., Saugus Police dispatchers received a 911 call from a frantic man who told them that he was driving to the hospital and his wife was giving birth in their minivan.

The baby had to be delivered in the van and was unresponsive and not breathing because the umbilical cord was wrapped around his neck. A Saugus Police dispatcher stayed on the phone with the father and had him remove the umbilical cord from around the baby’s neck and told him how to administer CPR.

The baby began breathing and started crying.
A short time later, crews from Armstrong Ambulance arrived and provided emergency medical treatment and transported the mother and the baby aboard the ambulance, while a Saugus firefighter drove.

The two were treated by the Armstrong Ambulance EMS team and safely transported to the hospital where they were healthy and doing fine. This is an example of excellent teamwork by Saugus 9-1-1 Dispatch, Police, Fire and Armstrong Ambulance personnel.

“Usually we like to transport expecting mothers to the hospital before the baby is born, but we are very happy that the baby and mom are both healthy,” said Richard Raymond, Armstrong Ambulance CEO.

Armstrong EMT Melissa Pierce and Paramedic Wayne Gilbert speak about their actions after responding, treating and transporting a newborn baby delivered in the back of a minivan in Saugus. Also pictured is Interim Chief Ronald Giorgetti of the Saugus Police Department.

Here is a link from WCVB recapping the story: https://www.wcvb.com/article/saugus-dispatcher-credited-with-saving-newborn/25992532