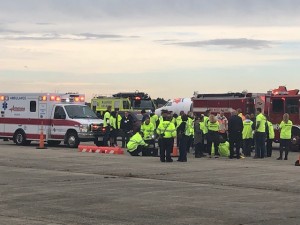 Several Armstrong Ambulance first responders joined colleagues from peer agencies in the area for an emergency response exercise at Hanscom Field in Bedford on Wednesday, Oct. 9.

Armstrong dedicated four responding and transporting units to the drill, which simulated an aborted takeoff resulting in fire and multiple casualties. As part of the exercise, paramedics and EMTs rescued mock victims and, in the case of a few, transported them a short distance in order to simulate transport communication operations.

“These kinds of live training programs help our paramedics and EMTs stay sharp and prepared for any kind of emergency,” Armstrong CEO Rich Raymond said. “I want to thank everyone who contributed to making this exercise possible and thank all of the agencies who worked collaboratively, drawing upon their individual expertise to create and respond to a very lifelike scenario.”

Armstrong has been the preferred ambulance provider for Hanscom Air Force Base since 2016.