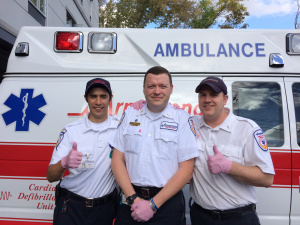 “Breast cancer touches us all, and this month shows us that every gesture that raises awareness is important, no matter how big or small,” said Richard Raymond, Armstrong’s CEO. “Our crews are proud to support Breast Cancer Awareness Month, and they are always willing to talk about how important this issue is, especially when someone notices their pink gloves and asks about them.”

About Armstrong Ambulance Service Inc.
Based in Arlington, Mass., Armstrong Ambulance was founded in 1946, shortly after Bill Armstrong returned from his tour of duty with the U.S. Marine Corps. While living at home, he watched his mother, a registered nurse, care for friends and family when they were injured or sick, and was inspired to follow her example. As the company grew, Bill earned a reputation for care and compassion, and quickly became an industry leader. He was instrumental in forming the Massachusetts Ambulance Association, developed to ensure the highest standards of care by ambulance services statewide. Today, Armstrong employs 300 highly-trained emergency medical services professionals, and provides EMS services to 17 communities in the Greater Boston Area, responding to more than 45,000 emergency calls every year.